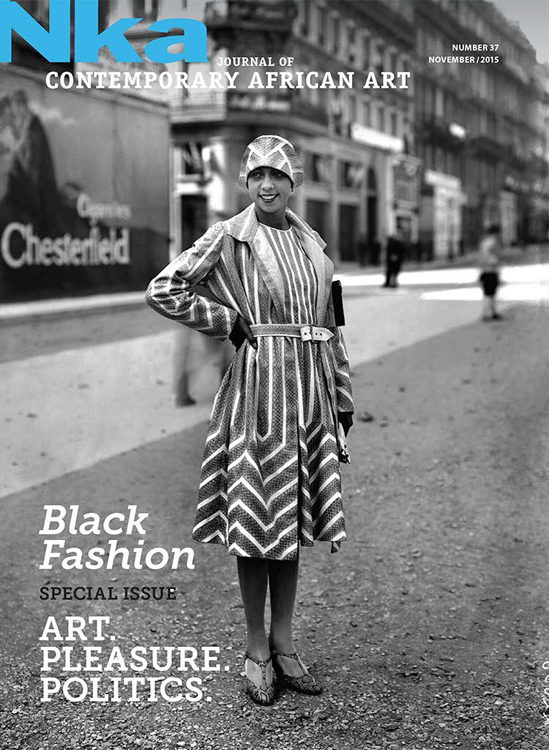 Here is the second part of my summary of NKA’s special issue on black fashion. I put a little commentary at the bottom.

Bill Gaskins’ interview with Anthony Barboza traces the history of one of the most representative photographers of the African American fashion scene. Barboza, who worked for Essence, GQ and an array of major publications all through the 70s, 80s and 90s, explains how his artistic vision, what he calls his “cultural approach”, was influenced by cinematography and real-life situations he experienced in the street, where expressions and body language channel a person’s cultural history (20).

Barboza says that vision is strongly influenced by the impression the model does on the photographer and here he has words of appreciation for African American models, emphasising their ability not only to wear clothes, but to embody desirability. The interview also includes some of Barboza’s iconic photographs for Essence magazine, which nicely complement his words.

Shantrelle P. Lewis, curator of the acclaimed exhibition The Dandy Lion Project: Articulating a Re(de)fined Black Masculinity, writes about the evolution of the project since its birth in Harlem in 2010. Lewis rightly points out that black masculine refinement has seldom attracted scholarly interest, citing Monica Miller’s Slaves to Fashion and the “dandy” entry in the Encyclopaedia Britannica as the only available academic sources on the subject (she lists Boudouin Mouanda’s and Daniele Tamagni’s photographic work, and Jeppe Rønde’s documentary on the South African swenkas as main visual referents). She clarifies that dandyism is more than wearing stylish clothes. It is a performative practice that manipulates clothing and attitude to “exert agency” (56) and claim the right to self-assertion. For this reason, Lewis places her curatorial efforts in opposition to photographic works that image black dandies in dramatically staged poses that “other” and “exoticise” them. The Dandy Lion Project is, instead, an effort to let the men accomplish the “paradigm shift” that will change entrenched perceptions of black masculinity, “employ[ing] sartorial instruments to articulate … [their] own humanity” (59). Out of this “conversation about power” (60), the dandy emerges as a “trickster-rebel” (61) who exceeds “what is ordinarily humanly possible”, including expectations about normative sexuality and gender identity, with his sartorial performance (59).

Joy L. Bivins reviews the exhibition Inspiring Beauty: 50 years of Ebony Fashion Fair. Opening in Chicago in 2013, Inspiring Beauty showcased more than 60 ensembles divided into the three thematic sections “Vision”, “Innovation” and “Power”. Ebony Fashion Fair, America’s most acclaimed show catering to underrepresented African American consumers, was the first cultural event to feature black models in haute couture designs and has, therefore, a special place in the history of black fashion. Its inclusive vision of glamour, directly and indirectly, drove the transformations of black self-consciousness from the 1950s to the 2000s. Bivins praises the exhibition’s ability to express fashion’s power to conjure “memory and fantasy” (82). It shows the Fair as a site of cultural production, where black sartorial performativity was collectively articulated and appreciated as a means of self-expression. The exhibition references the reciprocal relationship that existed between the fashion world and the audience and its value as a source of innovation for American black creatives. The Fair “used fashion as a tool to continue the conversation about the possibilities of black life” (88) initiated by Ebony and Jet, the two most prominent lifestyle magazines for black audiences marketed by Eunice Walker Johnson’s Johnson Publishing Company. It literally gave substance to blacks’ ideas of themselves: “creat[ing] a full-scale production of fashion fantasy and entertainment for audiences” (83).

Filmmaker Deborah Riley Draper recalls the story of her first documentary: Versailles ’73: American Runaway Revolution. It chronicles the events that led to the iconic fashion show held in the French palace, which was the largest collective of black models ever to represent American designers in a fashion event. Draper describes her work as an archaeological effort that prompted her to literally excavate and collate forgotten pieces of African American fashion history, in an effort to “destroy insulting notions of race” on the runaway and “widen the beauty aesthetic” (101).

Tiffany Gill focuses on social media, where black women who wear their hair natural meet to “explor[e] issues of identity, entrepreneurship, and community in black women’s lives” (71). These sites bring the “information sharing and exchange of advice” of the beauty shop to the digital realm. The use of hashtags like #TeamNatural to tag selfies “connects a personal quest for affirmation to a wider community” (76), giving visibility to non-normative aesthetic standards while cementing an afro-diasporic politics of self-love around the still-overlooked issue of hair politics. Till provides an important update to the academic study of the subject, which has so far mostly focused on offline processes of bonding, entrepreneurship, and self-assertion driven by black women’s concerns with their hair. An interesting aspect of Gill’s study regards “e-policing”: the aggressive effort of community members to impose and safeguard a set of aesthetic norms of natural hair care, which ends up “vilifying” choices that deviate from the natural standards (76). At the same time, Gill shows how this intrinsically fractured community can come together in support of women, often very young ones, who suffer criticism and isolation because of the way they wear they hair. This is what happened when Yaba Blay created a Facebook page to reach out to Tiana Parker, a child who was suspended from school for wearing locks. With these examples the article attests that black hair politics is a site of contention, layered with productive but also critical tensions.

Still on the issue of hair politics artist Sonya Clark writes a short contribution on her Hair Craft Project – currently on view at Boston’s Museum of Fine Arts – that engaged hairdressers across the world to style her own hair in various fashions to then transfer the design to a canvas stitched with silk thread.

The artist describes the project as a diasporic practice of heritage preservation that becomes individualized as the hairdresser “maps a head with a comb” (91). The project puts Clarke in dialogue with the contributors to the issue who write about hair-styling, the abovementioned Gill and Bill Gaskin, stressing how important hair politics is to the articulation of black identity through ornamentation and embellishment.

A’Lelia Bundles’ article focuses, instead, on her great-grandmother A’Lelia Walker, heiress to Madame C.J. Walker’s hairdressing company, with an account of the woman’s place in the glamorous African American life in 1920s New York. Bundles celebrates A’Lelia as the personification of “the spirit and flamboyance of the Harlem Renaissance” (104), copying quotes from poets and some of the world’s most prominent newspapers about Walker’s fabulous fashion sense. The article introduces us to a world of “brocaded metallic gowns”, “Russian court costumes”, feathered turbans, Egyptian headpieces, and the fabulous ensembles of Mae Walker and her bridesmaids, designed, among others, by Mildred Blount who would later create hats for Gone with the Wind. Referencing Walker’s interest and patronage of modernist architects, which she hired to build her New York homes, Bundles see her great grandmother’s fashion sense as part of a disrupting aesthetic vision that the woman put at the service of the budding community of black artists of the 1920s and 30s.

I enjoyed reading this issue and will definitely cite it in my research. It is an essential source for black fashion studies that convincingly stresses the political power of sartorialism to articulate self-assertion, self-love, and respect against white paradigms of beauty and ornamentation. Yet, I wish the authors had engaged more extensively with the “black” element of the analysis. Since black is here, convincingly, equated with the Afro-diasporic universe, I would have loved to read analyses of black fashion and beauty politics in Brazil, North Africa, and other major sites of Afro-diasporic culture. Although Africa figures in Lewis’ and Ford’s contributions, and Haiti is the concern of T. Lewis and Pringle, these mentions barely extend the reach of black fashion studies to the black realities outside of the US,  which remains the dominant framework of reference of the discipline and authors involved. But what would happen if we started from the margins of the diaspora, looking at how fashion and style are articulated away from the runaway and the major actors of industry (the US, but also South Africa, Ghana, and Nigeria, for example)? What if we looked at black fashion in countries where fashion is not even a national industry but more of an emerging sector, if not a neighborly, community-oriented endeavor? I hope this special issue of NKA will prompt more scholar to explore how a focus on the margins of the diaspora can enrich our understanding of the black beauty aesthetic.